The Severn Estuary and Bristol Channel support one of the most diverse fish assemblages in the UK, with over 110 fish species identified. There are a wide range of migratory species and estuarine specialists, as well as some more typically marine and freshwater species reflecting the influence of the wider Bristol Channel and major rivers entering the Estuary.

The wider assemblage of fish species, which includes the migratory species, estuarine specialists and the marine and freshwater species, is a designated feature of the Ramsar Site and a component of the estuary feature of the SAC.

River and sea lamprey are a primitive type of fish, belonging to an ancient order of vertebrates. With a distinctive suckered mouth and no jaws, they are unlike most other fish species in the UK. Although the population of lamprey has declined over the last century, they remain widely distributed within the UK. Sea and river lamprey spawn and spend their juvenile phase in fresh water and spend their adult life in the sea or estuaries. The Severn Estuary provides a migratory corridor to and from their spawning and nursery grounds in the rivers. The species occurrence description for both river and sea lamprey is not yet available. They are both designated features of the Severn Estuary SAC. 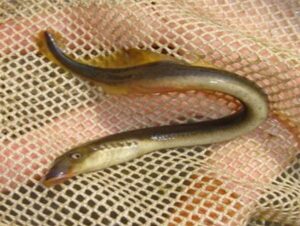 Allis and twaite shad are the only two members of the herring family found in fresh water in the UK. Both species used to be consumed in the UK before the fisheries collapsed; in the middle of the 19th Century, the value of shad rivalled that of salmon and in the River Severn, shad ma